city and the fireballs

When the flee started from Syria to Anatolia, when the cities destroyed, when the important artworks and ancient ruins demolished, when people suffered in many layers through a violently forced migration, most of my artworks turned into a grief material. Requiems of lost lives, hopes, memories.

This naïve painting started as an architectural complaint for city of Aleppo, then turned into a chaotic requiem for losses and hopes.

I started this painting around 2012, but couldn’t continue, couldn’t finish. Because I had no idea what I want to do as a completed work. I was adding a few touches time to time, year to year, hoping to finalize it with a bright ending. Through the long time it became an organic work and I realized it is a chaos including hopes besides the loss. 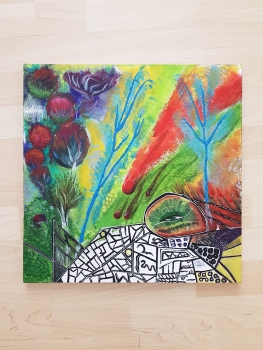